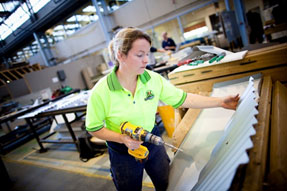 Nearly 12 months after it was established, the Apprenticeships Reform Advisory Group has delivered a suite of recommendations that could change Australia’s apprenticeship system. Apprenticeships are gaining a lot of attention at present in various states, at the national level, and internationally too. There’s too much going on to pack into one brief newsletter article so we’ll try to cover a bit of apprenticeship ground in each of the next few newsletters.

Let’s go first to the Apprenticeships Reform Advisory Group: Recommendation Report, released in early August. The Advisory Group was set up by Simon Birmingham in September last year. Its job was to offer an industry perspective on three areas in the apprenticeship system that Minister Birmingham saw as ripe for reform:

Three pillars of the apprenticeship system should remain standing

Apprenticeships have long enjoyed the strong support of employers and industry sectors across the Australian economy. This is because, through an effective combination of work integrated learning (incorporating work experience and structured training) and purpose built industrial arrangements, apprenticeships deliver:

The Advisory Group believes reform of the apprenticeship system should keep these three pillars in clear view.

There are 22 recommended actions, helpfully presented in a Matrix of Recommendations on pages 15-18. An important recommendation is to establish an apprenticeships hub which is explained on page 8. The hub:

… would act as an information clearing house and coordinate a range of information sources, including both online and offline elements. We envisage this hub would support users to more easily understand and access leading practice apprenticeship arrangements and provide information in relation to pre-apprenticeships, alternative models of training and deployment of funding. This hub would be accessible to multiple audiences, targeting both service providers and system users.

A view from Group Training Australia

The hub then becomes part of a number of the ensuing recommendations, all of which would materially change the existing apprenticeship system. As a media release from Group Training Australia (GTA) put it, the report:

… makes useful suggestions about lifting the appeal and status of apprenticeships through measures such as an apprenticeship hub, and improved links to training providers, schools and careers advisers.
Importantly, the report proposes a restructuring of the current incentive payments to employers to place a greater focus on apprentice commencement and retention.
It supports greater flexibility around incentive payments, raising the possibility of variable funding to different industries, occupations and regions, and even the idea of industry groups or employers securing funding for apprenticeships in certain areas and sectors …
Group Training Australia also acknowledges the report’s finding that the VET system already contains the necessary flexibility to support a range of alternative models of apprenticeship delivery.
In that regard, GTA supports the report’s intention to explore broader approaches to apprenticeship delivery, including competency-based progression, bundling of competencies and skill sets, and multiple training entry and exit points.

Recommendations that would have a direct impact on teaching practice include: