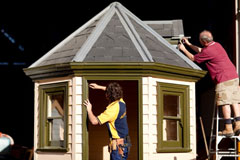 As Australia’s population is aging and are staying in the workforce longer, VET has a role to play in engaging/reengaging mature age workers. In 2012 the CSIRO released Our future world: Global megatrends that will change the way we live which identified six critical changes that will influence Australia’s future. What makes these changes critical is that we need to adapt and change to maintain a thriving society. One of the megatrends is titled ‘Forever Young’. It captures the impact of our ageing population on overall wellbeing.

The ageing population may be seen as a boon to Australia’s economy and society. Older people have a wealth of knowledge and wisdom which may hitherto have been under-exploited. Retaining some level of connection to the workforce later in life, via appropriate tapered retirement models, may lead to better physical and mental health outcomes for individuals. In addition this may open up under-utilised highly valuable knowledge resources.

If we are going to assist older Australians to retain connection to the workforce later in life there is no doubt VET will play an important role. It’s helpful to compare our progress on this front with other nations, and we can thank PwC for benchmarking how Australia is doing. In June PWC released the Golden Age Index: How well are OECD economies harnessing the power of an older workforce? It focuses on Australia and includes data from earlier work in 2003, 2007 and 2013.

The PWC report suggests Australia would reap considerable benefits from better connecting over 55s to the workforce. Sweden’s employment rate among 55-64 year olds is around 75 per cent. In Australia that rate is around 65 per cent. PWC’s calculation is that:

If Australia’s employment rates for workers aged 55+ was increased to Swedish levels, Australian GDP could be around 4.7% higher, equivalent to around $69 billion at 2014 GDP values.

The employment rate for 65-69 year olds in Australia is around 25 per cent, considerably lower than a band of countries with rates of around 40 per cent, including Japan, New Zealand, Chile and Israel.

The Golden Age Index report identifies three policy actions common to nations that perform most strongly. One of them is improving employability, suggesting that:

Policymakers could focus on promoting lifelong education and training, which could upskill older workers and thus potentially reduce unemployment of older workers.

VET could support the retention of the mature age worker through providing more workplace delivery. The policy approaches in high performing nations have varied. Some examples from PWC’s report: