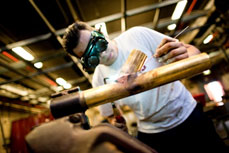 There’s an income benefit associated with having two or more qualifications. As the ABS reports it:

There’s an interesting if small difference between VET and higher education qualifications:

The qualification-job match isn’t always as close as you might think – 55 per cent of employed people held a non-school qualification that was relevant to their current job. The other side of the story, then, is that 45 per cent of employed people had qualifications that weren’t relevant. Part of the explanation for this apparent mismatch is that over time people gain skills on the job that lead them away from where they started out. The report notes that:

There are some big variations according to the kind of work you do though. Only 26% of people employed in Accommodation and food services, and 29% in Retail trade industries, had a relevant non-school qualification. However, 80 per cent of people employed in the Education and training industry held jobs relevant to their highest non-school qualification – the highest of all.